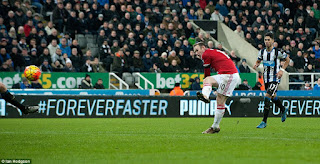 Wayne Rooney has become Manchester United’s highest ever scorer from the penalty spot in the Premier League as he scored his 19th to put his side 1-0 up against Newcastle.
Ruud van Nistelrooy had held the record before Rooney stepped up to slot home past Rob Elliot in Tuesday’s Premier League clash at St James’ Park after Mike Dean had awarded a controversial spot-kick.
The United skipper has started 2016 in fine goalscoring form, with his strike against Steve McClaren’s side his third in three games since the start of the new year, having also found the net against Swansea and Sheffield United.
Posted by nationalmoonlight at 10:28:00