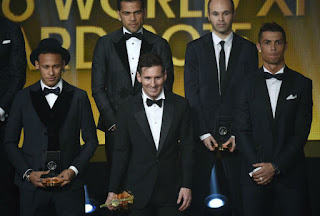 It was not all smiles at the Ballon d'Or ceremony in Zurich. There was a heated verbal exchange between Cristiano Ronaldo and Dani Alves in the build-up to the event in which the two stars did not hold back.
Tensions have been running between the pair since 'El Clásico' in November after which Alves uttered a few choice words during a press conference: "Cristiano Ronaldo is too much of a personality. When you win, you're always in the limelight and when you don't, you have to bear the brunt of it. We have too much to worry about ourselves, I don't care what he does".
It was the players' first encounter since the match at the Bernabéu, with the difference being the nature of the exchange between the Portuguese and Brazilian which was verbal on this occasion.
Posted by nationalmoonlight at 01:40:00