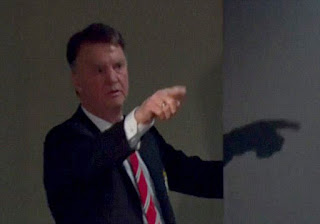 Louis van Gaal has been involved in another angry bust-up after snapping and calling a journalist a ‘fat man’ following a question about Wayne Rooney.
The Dutchman refused to talk about his Manchester United captain who had scored twice in Tuesday’s 3-3 draw at Newcastle, then walked out of his post-match press conference.

However, before leaving the room a visibly irate Van Gaal turned around, pointed at a Sun reporter and delivered his insult.
When it was put to Van Gaal, ‘Wayne Rooney has taken a lot of criticism this season . . . ’ he interrupted the question and stood up before saying: ‘We don’t speak any more about Wayne Rooney, yeah? You have criticised him, I don’t. You.’
Van Gaal then overheard an exchange between reporters and returned to the press room, adding, ‘You too, fat man, there,’ pointing at the journalist and suggesting he was among those who had been critical of Rooney.
The unsavoury incident does not reflect well on the club and is more evidence of the strain the United boss is under. He had earlier made a point of addressing accusations that his side are ‘boring’.
Van Gaal’s relationship with the press has deteriorated in recent weeks amid criticism of his management and the performance of his team, who have won just one of their last eight matches in the Barclays Premier League. He walked out of his press conference ahead of the Boxing Day trip to Stoke — a match United lost 2-0 — and has accused the media of writing lies about the situation at Old Trafford.

Q: Wayne Rooney has come under a lot of criticism this season this season…
LVG: 'We don't speak any more about Wayne Rooney, you have criticised him, I don't, you.'
Journalist: 'You too.'
LVG: 'You too, fat man, there.'
Journalists: 'You are on the naughty step now….I thought he had gone.'
Van Gaal even demanded an apology from the media after reports that his job was on the line during their eight-match winless streak before the turn of the year.
But it could now be the 64-year-old is forced to apologise after discriminating against a journalist because of his weight.
Van Gaal meets the media again tomorrow at the club’s Carrington training base, where he will preview Sunday’s match against Jurgen Klopp’s Liverpool at Anfield.
And Sportsmail columnist Jamie Carragher, reacting to the video of Van Gaal’s insult, tweeted: ‘LVG is hilarious! Can’t wait for his and Klopp’s interviews on Sunday!’
United are down to sixth in the table after throwing away a two-goal lead at St James’ Park.
They were 2-0 up inside 38 minutes and led 3-2 entering stoppage time before Paul Dummett smashed an equaliser for Newcastle.
And Rooney says United cannot progress if they continue to squander points. ‘After going 2-0 up, we were in control of the game, and we’ve let them back into it. To then get our third goal and concede again was disappointing,’ said the England striker, who has scored four goals in three matches.


‘They were silly goals to concede and they were avoidable. They have cost us two points. We can’t keep going on conceding three goals every game, so we have to work on that.
‘You can score as many goals as you want, but if you keep conceding goals, then it’s a problem.’
Posted by nationalmoonlight at 06:47:00