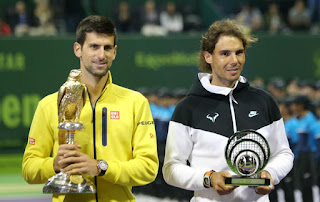 Novak Djokovic has won the Qatar Open after thrashing Rafael Nadal 6-1, 6-2 in the final.
The ATP world number one needed just one hour and 13 minutes out on court to seal his most emphatic victory over Nadal. The win saw Djokovic move ahead of the Spaniard for the very first time in terms of head-to-heads: 24 wins to 23.
Rafael Nadal admitted that Novak Djokovic is impossible to beat when he is playing the way he did in the final in Doha.
"No-one has ever played like that. The only thing you can do is applaud and congratulate him", said Nadal after he was blown away by Djokovic, losing 6-1, 6-2.
"There are some things I can do better, but the reality is that it's probably impossible to beat him on that form", added the Spaniard, who suffered his worst defeat to the Serb in 47 encounters.
Nadal stressed that he is more concerned with what he himself does rather than the tennis produced by the number one. "If you're only focusing on one person, you're not going to be happy. Obsessions are bad things in life. The only way forward is the path I set myself. If you get frustrated because someone is better than you, that's stupid and arrogant. If he's better, you accept it and work on improving", he finished by saying.
Posted by nationalmoonlight at 14:35:00