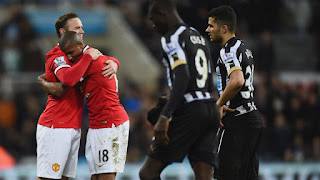 Manchester United will seek to extend a good recent record at Newcastle United on Tuesday night in the first of back-to-back away games in the Barclays Premier League.
The Reds have won the last three encounters at St James’ Park, scoring eight goals without reply, and overall have only lost four of 21 trips to the Magpies’ home in the Premier League.
Newcastle lie third from bottom in the table after losing their last four games 1-0, including a battling reversal at leaders Arsenal at the start of the month, but may take encouragement from their backs-to-the-wall goalless draw at Old Trafford in August.
Five months before that, it took an 89th-minute Ashley Young goal to snatch the points on United’s most recent visit to Tyneside, during a six-game winning streak that ultimately helped Louis van Gaal’s men seal a top-four place.
Recalling last season’s corresponding fixture, van Gaal told MUTV: "It was a late win and a very important one, but it's not an easy ground. I also think Newcastle played very well at Arsenal [on 2 January] but they lost and that's football – you can lose despite playing a good way of football."
Among several players on the Newcastle sidelines are Dutchmen Vurnon Anita and long-term injury victim Tim Krul, who helped thwart the Reds at the start of the season and was famously brought on by van Gaal to help the Netherlands win their World Cup quarter-final penalty shoot-out against Costa Rica in 2014.
Three other Oranje internationals could start for the Magpies, including Siem de Jong and two other men who were part of van Gaal’s squad in Brazil two years ago.
"They have Darryl Janmaat and Georginio Wijnaldum also, who played for me in the Dutch national team, so I'm happy to see them again," the boss added.
United are bidding to extend the winning run at the start of 2016 to three games, following the victories over Swansea City and, in injury-time in the FA Cup on Saturday, Sheffield United.
And after Tuesday's tussle with Steve McClaren’s side, the Reds’ attentions will turn to Sunday’s big clash with Liverpool at Anfield.
It all adds up to an important few days but van Gaal insists: "It’s always a big week for Manchester United because the expectations are always high, we have to win and the pressure is big."
Posted by nationalmoonlight at 12:59:00