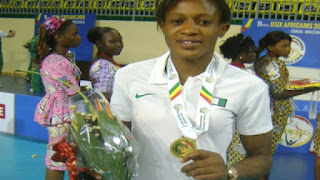 
Adekuoroye who was adjudged the Best Woman Wrestler at the just concluded Pro Wrestling League in Delhi, India where she led her team, Mumbai Garudu to the title was received at the Murtala Muhammed International Airport alongside her coach, Purity Akuh by a large crowd including members of the National Sports Commission (NSC), Nigeria Wrestling Federation, members of the Supporters Club and wrestling fans.
Expressing gratitude to the reception, the 2014 Commonwealth gold medallist said she is now focusing on making the country proud at the Rio 2016 Olympic Games.
“When I was going, I just thought I was going to fight against those wrestlers that I will meet at the Olympics, wrestle them and then come back to the drawing board maybe to correct the mistakes I notice, but it turned out to be a perfect competition for me.
“Coming here and meeting this kind of reception, I am so happy. It’s not me that they have come to honour, but to honour my God. And by His mercy will honour them. I am very proud of them, Adekuroye said.
Posted by nationalmoonlight at 15:02:00