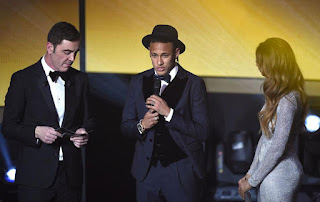 Neymar has admitted his disappointment with the Ballon d'Or results.
"In all honesty yes, I'd hoped to come second", said the Barcelona striker, who finished third behind the winner, his teammate Lionel Messi, and Real Madrid's Portuguese star Cristiano Ronaldo.
"But I'm over it now. It's another season and it's time to do things well all over again", said Neymar, who won five out of six possible trophies with his club in 2015.
"Now I have to work a little bit more to be amongst the three finalists again", added the striker, the first Brazilian to make the final three since Kaká won the award back in 2007.
Messi took 41.33% of the votes from the captains, national coaches and reporters from FIFA's member states. Cristiano Ronaldo was second with 27.76%, whilst Neymar came a distant third with 7.86% on the votes.