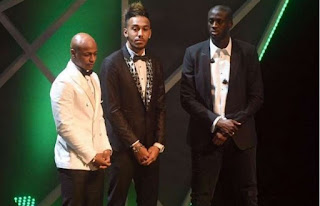 In an interview with L’Equipe, the 26 year old Ghanaian forward Andre Ayew condemned the decision of CAF on making Gabonese star, Pierre-Emerick Aubameyang  the African Footballer of the year few hours after Manchester City star Yaya Toure also criticized Pierre’s emergence..
Andre who is the son of Ghanaian legend, Abedi Pele said he expected either himself or Yaya to have won the award having played in the final of the last AFCON..
He said in the interview:

Andre’s Father Abedi Pele won the award in 1992 which was the last time a Ghanaian footballer did so..
Posted by nationalmoonlight at 12:32:00