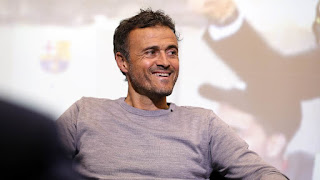 Luis Enrique Martinez coached FC Barcelona to their second treble in Club history. He is in just his second season with the first team and has already won almost everything. Now, just before Barça are set to play in the 2015 Club World Cup, Luis Enrique sits down with Barça TV and fcbarcelona.comto talk about some of the  unknown sides of his personal life, such as his fondness for extreme sports and how he combines family life with football."My wife would say that Barça is our first house and our own house is our second," he says. Luis Enrique goes on to discuss his first head coaching experience, when he led Barça B, as well as what it’s like to see the Messi–Neymar–Suárez phenomenon up close.
"They are unique players. We have many players who are the best at their positions. It is a perfect scenario."Luis Enrique also talks about the pressure and responsibility of his job as well as his philosophy regarding self-discipline. “Being constantly praised weakens you,” he says.
The head coach also opens up on subjects like his personal character, the atmosphere in the dressing room,  and even his tastes regarding music and fashion.
We don't want to give away all of the interesting things he had to say. Enjoy the interview, which leaves no stone unturned, so you don’t miss this unique perspective from the man himself.
Posted by nationalmoonlight at 13:24:00