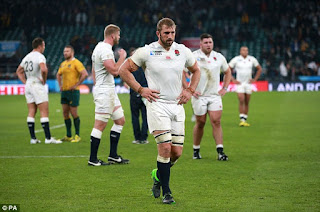 Eddie Jones will on Wednesday confirm a cull of leading players from the England rugby squad which failed to qualify for the knockout stages of last year’s home World Cup.
The Australian, who succeeded Stuart Lancaster as national coach, has opted for a shake-up just weeks after taking charge.


Lancaster’s captain, Chris Robshaw, will retain his place in the squad of 33 to be revealed at Twickenham, but Tom Wood, Brad Barritt, Geoff Parling and Ben Morgan are expected to be among many prominent casualties. Joe Marler, who has established himself as England's first-choice loosehead prop in recent years, is another whose place in the squad may be in jeopardy. +9
Tom Wood, a mainstay of the England side under Stuart Lancaster, is expected to be axed from the squad

Luther Burrell, who was controversially left out of the World Cup to make way for Sam Burgess, is set to be overlooked, and Danny Cipriani has again missed out despite fine form for Sale.
Jones has chosen to recall Dylan Hartley and Manu Tuilagi from disciplinary exile, and there could be seven uncapped players named: Josh Beaumont, Jack Clifford, Elliot Daly, Ollie Devoto, Will Fraser, Paul Hill and Maro Itoje.
Itoje leads the cavalry charge of uncapped young talent into the England squad Jones instigates a momentous post-World Cup overhaul.

Saracens’ 21-year-old lock, who can also operate at blindside flanker, is set to be included in a 33-man group for the Six Nations along with another versatile forward — Sale’s Beaumont, son of RFU chairman Bill Beaumont.
Itoje has been regarded for some time as an emerging sensation. The former Harrow School pupil was captain of the England Under 20 side who won the junior World Cup in 2014 and he burst to wider prominence for Saracens late last season. He was picked in Lancaster’s initial 50-man World Cup training squad before being released in the first cut.
If there was a sense last summer that he wasn’t quite ready for Test rugby, that is no longer the case. Itoje said: ‘Given the opportunity, I think I would do well. I am confident in my ability. If I am put in that situation I think I will give a good account of myself.’
Mark McCall, Saracens’ director of rugby, believes the rookie has the temperament to cope with a Test call-up despite concerns about the clamour for him to be promoted and even made captain. +9
Chris Ashton, diving over here against Worcester earlier this season, is set to be recalled by Eddie Jones

‘He has brought real consistency to his performances. He makes things happen on and off the ball. His lineout intellect and knowledge is growing, but he’s a young player and people have to realise that there’s more to come.’
Part of Itoje’s development has been learning to cope with mental pressure. From school rugby all the way through until this season, he was consumed by pre-match nerves. ‘I can now relax a lot more,’ he said. In the past I was very nervous and agitated before kick-off. My first game was for St George’s School Under 11s against Haberdashers and I couldn’t sleep before the game. It’s something I’ve definitely got a lot better at. I think I am comfortable with senior rugby now.’
Reflecting on his three weeks in the England training camp last summer, Itoje added: ‘I learned a lot about myself. I felt comfortable in that environment. I didn’t feel that I was out of my depth in any way, so it was a good experience.