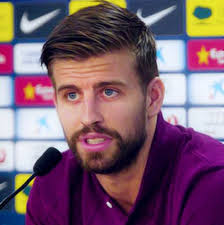 Barcelona defender Gerard Pique could be punished for his recent social media use after La Liga’s “anti-violence committee” has reviewed his actions and sent a case to its discipline committee.

Pique has riled La Liga rivals Real Madrid with his use of Twitter, while he has also spoke controversially in a postgame TV interview after last week’s bad-tempered Copa del Rey match with neighbours Espanyol.
When it was first reported last week that that Spanish football authorities were investigating his behaviour, the Blaugrana centre-back reacted by posting a message including a video which appeared to show Espanyol fans abusing both his wife Shakira and son Milan during the recent La Liga fixture at Espanyol’s Cornella El-Prat.

Such extenuating circumstances may have been considered by the anti-violence committee members who have reviewed Pique’s social media use and decided to send a case to their colleagues on the discipline committee who could fine the Spain international or even ban him for some club games.

“The contents of the messages sent via the social media Twitter by the Barcelona player Gerard Pique will be passed on so that the RFEF’s Sports Disciple Committee can analyse them and make a judgement in respect to the player.” said a statement picked up by El Mundo.
Pique had been supported by Camp Nou fans during the 4-0 La Liga win over Granada last weekend. Then during Wednesday’s return Copa del Rey game at Cornella El-Prat, Espanyol fans unveiled a banner which insulted Pique’s wife, while there were also reportedly abusive chants aimed at the Colombia-born pop star.
Although such incidents were not included in the official referee’s report on the game, the anti-violence committee will now seek documentation in order to decide whether to act or not — with fines for Espanyol and a partial ground closure possible.
“The commission rejects these acts and announces that it will analyse them next week so that La Liga can provide the documentation to make a judgement in this respect.” the statement said.
Espanyol president Joan Collet, who defended his own club’s fans after reports of racial abuse aimed at Barca attacker Neymar during the recent La Liga meeting, has offered a partial apology for the banner and chants insulting Shakira.
Asked about Pique’s tweeting on Radio Marca earlier in the week, Spain coach Vicente del Bosque replied that there were times when it was better not to use social media.
“We need to look to get on together as well as possible.” former Madrid player and coach Del Bosque said. “You must know how to use, or not, social media.”
Pique teammate Dani Alvez has also been in the news following his rant on media.
Posted by nationalmoonlight at 20:53:00