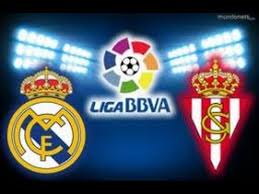 Real Madrid will return to action after their FIFA-imposed transfer ban when they take on struggling Sporting Gijon in Zinedine Zidane's second match in charge.
The build-up to Sunday's game has been overshadowed by Madrid and city rivals Atletico being handed a suspension for the next two windows - which both clubs will appeal - as a consequence of alleged breaches "relating to the international transfer and registration of players under the age of 18".

Madrid CEO Jose Angel Sanchez said on Thursday: "It is completely untrue that we fielded players aged under 18 without registering them with the RFEF [Spanish FA] and that we failed to comply with the regulatory requirements.
"This club has a set of ethical values and the people in charge in this area [youth recruitment] have never deviated from them."
Madrid's return to on-pitch matters will provide the playing squad with a welcome relief from the fervent speculation which has already begun over how the suspension will affect the futures of current and potential future squad members.
Zidane will be confident of victory, with Madrid having lost only one of their last 27 La Liga home games, a defeat that came in the infamous 4-0 Clasico mauling at the hands of Barcelona earlier this season.
They face an out-of-form Sporting side who sit 18th in the table having lost seven of their last eight league matches.
Zidane had a dream start to his new job after replacing Rafael Benitez, thumping Deportivo La Coruna 5-0 last weekend, and midfielder Luka Modric is optimistic about the legendary Frenchman's chances of success as a coach.
"I believe he will be a great coach," he told the Daily Mail.
"He was a great player - one of the best in football history. Certainly this helps when you walk into the dressing room with so many stars. I hope we can start playing better and better.
"The first game we did well and we just need to continue playing as a team. We have so many quality players and if we can keep playing like this, we can achieve many great things. His big message is to try and get us playing as a team.
"He knows a lot of players from two years ago when he was coaching with Carlo Ancelotti. We had an amazing year. I am sure that we can repeat something similar.
"When he is speaking, of course you listen and you want to learn more. That helps as well. I am sure he will do well like us."

Key Opta stats:
- Real Madrid have lost just one of their last 13 league games against Sporting (W10 D2), but it came at home (0-2 in April 2011).
- Sporting have scored just one goal in their last four league visits to the Santiago Bernabeu.
- Zinedine Zidane’s side have fired the most shots on target in La Liga this season (152) while Sporting have had the second fewest (62), just behind Espanyol (57).
- Cristiano Ronaldo (four), Gareth Bale (eight) and Karim Benzema (six) have scored 18 out Real Madrid's last 19 league goals (Lucas Vazquez scoring the other against Real Sociedad).
Posted by nationalmoonlight at 15:32:00