MEET THE FAMILY: Zinedine Zidane named Real Madrid boss... are his sons set to become stars at the club too? 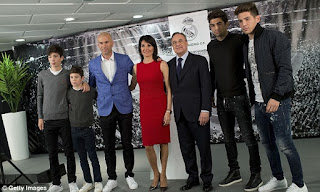 Zinedine Zidane was announced as Real Madrid manager on Monday night, replacing the sacked Rafa Benitez.
At his presentation at the Santiago Bernabeu, he was accompanied on stage by his four sons and wife, who watched as he gave a speech on what he described as an 'emotional day'.
Here's all you need to know about Zidane's family, stood by his side, as he took the reins of the club he played for between 2001 and 2006 - with all his boys potentially stars of the future at the Santiago Bernabeu.

Enzo Fernandez (20)
The eldest of Zinedine's boys and the most similar to him in football terms. He's a creative attacking midfielder and after starring for Real Madrid C last season was moved to Real Madrid Castilla, their B team.
There he was managed by his father until now, with Zidane Senior appointing him as captain of the team. The former France midfielder insisted he did not do this out of nepotism, saying: 'At the club he's treated as a player like the rest. Later, at home, he returns to being my son. This is what he wants too.'
Under Rafa Benitez he trained with the first team on occasion, and his chances of doing so again may increase with his father's promotion. Excellent technique is his biggest asset.
He has played for Spain at youth team level but is eligible to feature for Algeria or France as well. 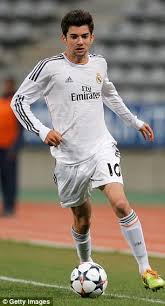 Luca Fernandez (17)
Luca Zidane is a goalkeeper and is reckoned to be the most likely of the family to follow in his father's footsteps of playing at the top level.
However, he hit the headlines in November for copying his dad in a more disappointing way. He was sent off playing for the U17 side for headbutting an Atletico Madrid youth player. It brought back memories of Zidane doing the same to Marco Materazzi in the 2006 World Cup final, his last match.
Luca has played for France at U17 level, including at the U17 European Championship in Bulgaria in May. He saved three penalties in a shoot-out against Belgium but also missed one of his own, an attempted Panenka which went over the bar.
Emulating his father has never been on the menu for the young stopper, who explained: 'I always liked going in goal when I played with my brothers and my father when I was young. More than anything else, I didn't want people to compare me to my father.' The wife: Veronique Zidane
The pair met when Zidane was 17 and have been married over 20 years, tying the knot back in in 1994.
It was fortunate the pair got to know each other at all, when they used to cross paths frequently while Zidane played for Cannes in 1988-89 but was said to be too shy to approach her. Eventually he got over it and the pair began to talk on a regular basis.
She is French, from Spanish descent, as well as a former dancer and model. Spanish website Ahora Mismo claim she would have loved to have had a daughter, to pass on her passion for dancing, but instead she'll have to deal with four boys who are taking after their father. 
heo Fernandez (13)
In March 2015 Theo Zidane, a midfielder with Real Madrid in the Infantil B (Under 13) side - now Infantil A - scored a brilliant goal which drew comparisons with those of his father.
He jinked into the box and lashed home with his left foot, sparking excitement among Real Madrid fans about his and his brothers' potential.
Even at his young age, Theo has a box of tricks to surprise opposition defences, a goalscorer from midfield and able to shoot from distance. 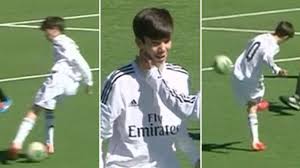 Elyaz Fernandez (10)
Still being in his formative years, it's unknown how good Elyaz could go on to be. He plays in midfield and is left footed, with Madrid describing him as someone with 'good vision of play'.
Elyaz was brought into the set-up in 2013 and plays in the Alevin B side (Under 11s), with 10 levels to go through before the first-team. 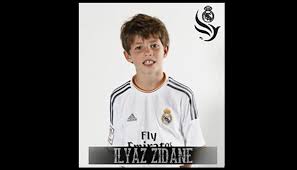