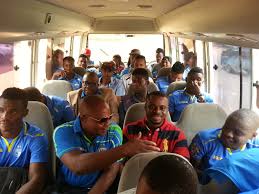 A bus carrying players from Nigeria's football league champions, Enyimba Football Club, has been attacked by robbers. However, the club announced that no one was injured.
The incident occurred in Okene, a community in Kogi State when the Aba Millionaire were heading to Kaduna to take part in the Glo Super Four Tournament,
"We can confirm that our team bus was attacked by armed robbers this afternoon in Okene, Kogi State on our way to Kaduna for the Super Four' a Spokeman of the club confirmed.Thankfully, there were no injuries during this unfortunate incident.

It will be recalled that Kano Pillars also suffered the same fate last year on her way to Abuja with some of players sustaining various degree of injuries.
Posted by nationalmoonlight at 10:56:00